Creating a Character: Porter the Penguin

Getting a peek behind the scenes can sometimes be a let-down. Think Dorothy in The Wizard of Oz. You find out that the Great and Powerful Oz is just a man once the curtain has been pulled back.

But sometimes, it only serves to further satiate one's appetite. I find myself thinking of watching hours of "behind the scenes" footage on DVDs for my favorite movies (in fact, this is maybe one of the only reasons to buy DVDs anymore...as an aside).

We're going to meet somewhere in the middle here, as we take you behind the scenes in the process of creating a character--but without spoiling any of the fun (in case you happen to be an audience member).

The process of creating a character pretty much goes like this:

Our latest character is Porter the Penguin. He's the coolest bird on either side of the equator, and he's showing up to help emcee the e4 event in Phoenix. We can make anything into an AniMate--a company logo, a person, a mascot, a spokesanimal, an abstract design, a talking product...anything.

We ended up settling on the Penguin because the event was titled "The Cool Wave" and, well, penguins are some of the coolest--and coldest--birds around.

We then did quite a bit of research (which entailed watching quite a few penguin videos) on different types of penguins and decided on general species that we wanted to emulate. Our first penguin animation was, well, a lot different than our final result. Observe: 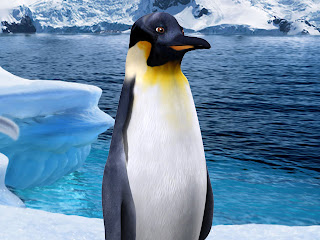 Original Porter was quite realistic--and modeled the most closely after a real penguin species--but he was, shall we say, a bit...evil looking? This was the kind of sharp-beaked creature that would play a villain opposite Batman in a movie. Not quite what we were going for when we wanted a friendly emcee personality.
We settled on doing a more cartoon-based look. The feathers and body and such would still retain realism, but we would then exaggerate some features; the eyes and the beak, chiefly. What we got was still recognizably Penguin--but was also a lot friendlier looking. 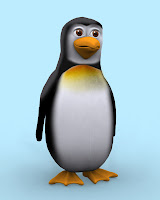 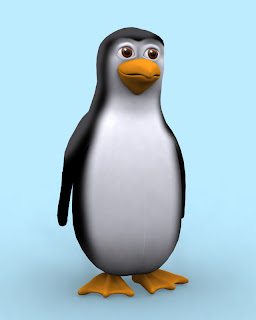 We liked this little guy quite a bit...but the shape of the eyes was off. We decided to change to a more horseshoe shaped form...and also started to experiment with eye color. 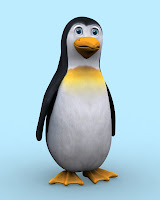 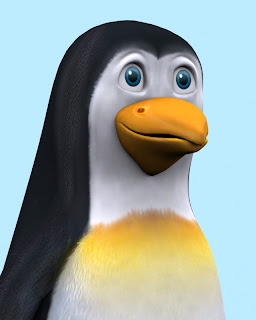 We also loved this Porter, but thought he looked a little, well, perpetually sad. Also a bit juvenile. We course-corrected by changing the size of the eyes... 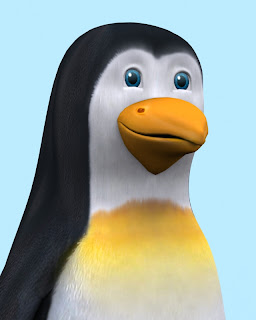 Well, changing the eye size didn't achieve the effect that we wanted. Sometimes you don't know how a character is going to animate until you do it. It's funny, but as we're developing our characters, we get a good sense of the situation and context of the event, and then start to form their personality. At this stage in the game, we knew that this wasn't our Porter. It just didn't look like him.
We switched his eyes back to brown, angled the outer corners down (instead of the inner corners, like in the larger blue-eyed sample), and increased the size of the eyes.