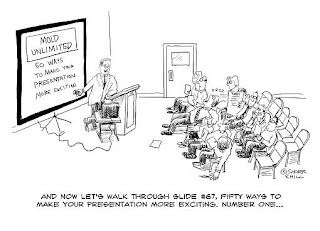 It's rather popular to openly, vocally dislike PowerPoint. It's almost cliche to groan when thinking about a presenter with slide after slide after slide of information. By now, most people have heard the expression "Death by PowerPoint" and have seen PowerPoint presentations that make getting a root canal seem like it'd be a grand way to spend a few hours.

It's a bit unfair; PowerPoint is a tool and is not directly responsible for its misuse. However, when the misuse is so rampant and there seems to--generally--be little interest or ability to create different, fresh and truly effective PPT presentations, it's natural that people would grasp on to available alternatives.

But...are we throwing the baby out with the bathwater?

We saw this article on Yahoo! News and we have thoughts. Our commentary is in bold-italic.

10 Things to Do Instead of PowerPoint

The bad news: there are thousands of presentations every day, everywhere around the world. Most of them use PowerPoint, badly, as speaker notes, with more words or numbers on each slide than anyone can read.

The results are predictably boring – no, excruciating -- for their hapless audiences. That’s human misery on a massive scale.

The good news: in an effort to make the world a better place, here are 10 things to do instead of PowerPoint. Ways to make your points without the sleep-apnea-inducing effects of boring slides. Ways to pep up your presentations without much additional effort. Your audiences will thank me.

1. Use props. For most workers, in a cubicle world, it’s sensory deprivation from 9 – 5. The whirr of computers and the A/C. The hum of colleagues chattering away. The beige walls of the cube farm. The fluorescent lighting. It’s amazing anyone stays awake. Offer the audience, then, something physical. Instead of describing that new product on a slide, show them a prototype. Pass it around. Let the audience get physical.

Workers can also be out in the field every day and absolutely unaccustomed to sitting still in a presentation for x hours. There are people who learn by seeing and hearing, but there are also those who learn exclusively by doing. Many people would prefer to DO instead of SEE: Think of someone who doesn't read directions before trying to put together a piece of furniture...even if they don't get the best results.

2. Use music. We have an emotional response to music which is much more powerful than we do to most words. Especially words like “3rd Q results” and “product optimization.” So add a soundtrack to your presentation. It will bring it to life. Do obey copyright and licensing laws, please.

Music can, in our experience, be a tricky thing within a presentation--simply because evoking that emotional response should be done with care. Choose the wrong piece of music and it's discordant. Ahhem. Also make sure that the music is unobtrusive--or you'll get a jam session instead of a content session.

Music should also be used throughout an event--not just in a presentation.

3. Use video. Video –good video -- has all the life in it that static slides lack. A good clip can enchant, move, and thrill and audience in 60 seconds. You can create the right emotional atmosphere to begin or end a speech – or to pick it up in the middle.

Or use a bad video. Not a boring video, but a low-quality, as-seen-on-YouTube video that entertains and delights. Use video to tell your story. Use video to evoke an emotional response. Use video to demonstrate a product. The key is to entertain with the video (humor is very effective) and to keep the video short.

4. Use a flip chart. Create any visuals you need right there in front of the audience. No need for technology. Just a magic marker and your arm. The act of creation draws the audience in where a slide doesn’t.

Your results may vary. We've had mixed experiences with flip chart presentations. While some supplement is very effective; your short-hand is not always the short-hand of the audience, flip charts can be hard to read, and presenters vary greatly in artistic/calligraphic ability.

5. Ask the audience. Of course, the best way to draw the audience in is to draw them in. Ask them to tell you their stories – as they relate to the topic at hand. Ask the whole audience or just selected volunteers.

Pre-screen these first. WARN someone that they'll be asked to tell an anecdote if you can--or you better know your audience very well. Never put anyone on the spot unprepared, and make sure that the selected audience member has a concise, cohesive, relevant-to-everybody story to share. We've seen audience anecdotes that were more dull than a bad presenter.

Beware the crickets chirping. It may take away from the spontaneity of the interaction, but be sure that you have someone who IS ready to share.

6. Ask the audience – 2. Break the audience up into small groups and get them to respond to a challenge that you set, a question that you ask, or a problem that you pose. Then have them to report back to the whole group.

This is a great idea. Discussion groups allow people to make information personally relevant and sharing with peers reinforces content. Set acoustic conversation music in the background and allow tables to discuss for several minutes. Designate a team leader who will be charged with collecting responses and reporting back.

7. Ask the audience – 3. Play a game with the audience – relevant to the topic. Award prizes. Audiences love to compete. Just don’t make the questions too difficult or the prizes too expensive – or too cheap. Only Oprah gets to give away cars.

We couldn't have said it better ourselves. Games are a fantastic way to engage the audience. Have a game that runs throughout the session, opens the session, or reviews content at the end. Put the audience onto teams and keep them in teams.

8. Ask the audience – 4. Get the audience to design something – new products, plans, or ideas. Give them plenty of paper, sticky notes, ipads, or whatever you have on hand that they can play with.

Adults want to play, too. Giving the audience a chance to exercise their creativity allows their brain a natural "break" to absorb and synthesize previously covered information. Content-related creativity can be extremely fun and actually inspiring.

9. Ask the audience – 5. Have the audience create video responses to what you’re talking about. Hand out a dozen flip cams and get them in groups. Give them a limited amount of time – 10 minutes, perhaps. Then show some of the video to the whole group on the big IMEG screen.

This is a wonderful idea in theory. In practice we've learned that most people aren't even amateur videographers. While the act of creation is fun, it's tough to get everyone involved, tougher to shoot something that is engaging to watch, and toughest still to organize it in a brief amount of time. That's not to say it can't be done--and we have seen some incredible audience-created video pieces--but use with caution.

10. Combine any 3 of these to create huge audience buzz. Stop thinking of a presentation as a static activity where you show slides to a catatonic group of fellow humans. You passive, them active. Instead, treat them as co-conspirators in something exciting, educational, and fun.

People learn best when they can make the information relevant to them. This includes synthesizing it in a variety of ways; quiet reflection, group discussion, personal practice, hands-on activities and even creative, fun exercises. The enemy here is not PowerPoint, it's a lack of consideration for an audience that wants to actually INTERACT instead of be talked to for hours in a way that is disrespectful to the workings of the brain.