"We Have Met the Enemy, and He is PowerPoint" 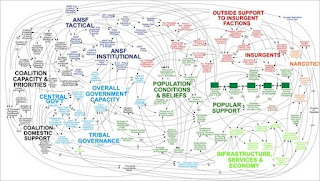 While perusing the news, I came across this article in the New York Times about the U.S. Military rallying against PowerPoint as an instructional tool.

The slide to the left was used to explain military strategy. Do you get it? Apparently, neither does anyone else--showing the striking lack of clarity that relying on PowerPoint can bring to a presentation.

A few quotes out of the article (emphasis and italics mine):

“It’s dangerous because it can create the illusion of understanding and the illusion of control,” General McMaster said. . . “Some problems in the world are not bullet-izable.”

Gen. David H. Petraeus, who oversees the wars in Iraq and Afghanistan and says that sitting through some PowerPoint briefings is “just agony,”

Commanders say that the slides impart less information than a five-page paper can hold, and that they relieve the briefer of the need to polish writing to convey an analytic, persuasive point. Imagine lawyers presenting arguments before the Supreme Court in slides instead of legal briefs.

Senior officers say the program does come in handy when the goal is not imparting information.

Wow. Those are some pretty powerful statements from some people who have the responsibility to convey information effectively to the troops, higher ups, strategists, etc. The highlighted points in particular are both astounding and accurate:

Sitting through PowerPoint can be agony.
PowerPoint relieves the speaker of the responsibility to convey a concise, persuasive point.
PowerPoint is great when the goal is not imparting information.

And yet, PowerPoint is used almost exclusively in corporate presentations. What we've seen through the years has been right in line with the impressions of the article. Speakers all too often use PowerPoint as a crutch, and all too often, the PowerPoint itself hinders the ability to convey information--which is the opposite of its intention.