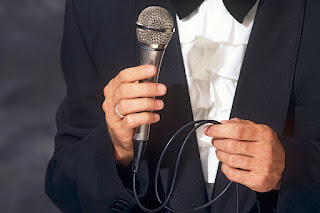 We don't have a cut-and-dried preference either way. The ratio ends up being about 70% internal, 30% external. There are benefits to either approach. Recently, however, an internal emcee--who was already quite good--asked us what external/professional emcees did that they didn't, and what they could do to be better.

But generally, here are the advantages of having an external emcee.

1. Sole focus is on the event at hand.

Something that we hear, over and over again, about the value of live events is the irreplaceable amount of networking time. It's one thing to communicate with global colleagues on a daily basis; it's quite another to have them face to face with you--attention undivided.

Internal emcees, naturally, cannot give up this valuable time. You wouldn't want your VP of sales NOT to network with their direct reports.

There is also a matter of divided responsibilities. Internal emcees often have additional event tasks; managing an element of the event, leading a breakout session, and handling day-to-day business issues that crop up.

External emcees don't have any of that distraction while they're on the event. This gives them the advantage of dedicated time and focus. Which leads to...

Rehearsing is critical for ANYONE. Even if it's just a cue-to-cue walk through or a mic check, you don't want to go up on stage without rehearsing. This becomes more and more crucial as events become more interactive and complex; incorporating multimedia, multiple presenters, panels, social media, and gamification elements.

Because external emcees are there to do one thing--emcee the event--they are available for rehearsals whenever there are rehearsals to be had. They don't get dragged into additional meetings or workshops.

In general, internal emcees will keep pace with the company culture. They build rapport with their people through networking and engaging in the same activities as they do. Sometimes--for better or worse--these activities include late-night drinking/partying/events AT an event.

The peer pressure involved--especially if it's a once-a-year event with a close team or an opportunity to wine-and-dine clients/customers--can be immense. We're not saying that these elements of an event are bad--we're just saying that internal emcees should probably limit alcohol consumption and call it an early-ish night.

We have had hung-over internal emcees on the stage. They dealt with it and powered through, but they didn't have the same energy and focus as a well-rested, ready-to-go emcee.

(This isn't to say that external emcees are always angels in this regard, mind, but there is less networking pressure to do so.)

This ties in with the point about being over-committed to multiple tasks at an event, networking, staying out late and drinking, but it ALSO refers to being professionally trained to maintain one's energy over multiple days.

Most external emcees are specifically trained/prepared to emcee for multiple days without losing their energy or ability to do their job. Even when they may have to do the same thing over and over again or rehearse multiple times.

This is trick of training and practice and mental energy, but it can also be as simple as being physically up to the task. We have had internal emcees lose their voices by the second day of an event simply because they're not used to speaking at-length and at-volume that the emcee performance requires.

Sometimes emcees need to get a bit silly. Not ridiculous, mind, but it takes a certain shedding of a straight-laced persona to--say--host a game show with enthusiasm. When internal emcees are too concerned about maintaining a certain type of image or professional relationship with their audience, it can inhibit their ability to be the most effective emcee they can be.

Often times it also impacts the delivery of script. There will be something that needs to be said, but an internal emcee will veto it as not consistent with their personality/sense of humor/whatever--which is valid, but can reduce the overall impact of the event. Internal politics can also play a part in this.

We had an emcee who hosted a game show, but was very concerned about how they came off. As a result, they were self-conscious and rushed through questions. They game show was still great, but it could have been much better with an infusion of an energetic host.