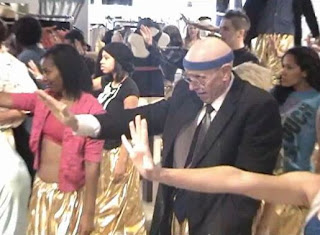 Since we've been talking about Team Building (or teambuilding or team-building or teamBONDING) experiences lately, we thought we'd point out another team building trend: super trendy trends.

Some examples are team challenges/experiences like:
It's interesting to see social media-influenced trends trickle down into the corporate world...about a year after the internet has stopped talking about them. It makes sense, in a way, that this is the time line. It does, after all, take time to build up best-practices and processes around these concepts.

However, the window of opportunity for these super-trendy team building concepts can be very short lived. There are some components of these ideas that have legs or that might work well as part of a larger context. Creating videos, for instance, is something that can be used in team building in a variety of different ways. It's only the colloquialism "viral" that gives it the trend-spin.

The danger, of course, is that these things quickly become passe or "corporatized" to the point where they lose that freshness that made them appealing in the first place. Let's take the flash mob, for instance. The idea behind a flash mob team building is that everyone learns the same steps and has to coordinate to come up with a final product. They then, at some point, perform this--perhaps during an interlude at an award ceremony, for instance. We've seen this now about a half-dozen times at various events and it has never failed to...well...fall a little flat. Flash mobs in and of themselves are/were originally delightful because they had an element of surprise. Some people--the dancers--were in on the mob, but the rest of the audience was amazed by this moment of socially-awkward-moment-turned-coordinated-effort. In addition to taking away novelty, the amazingly complex movements performed by a group need to be simplified, played down and cleansed for a corporate audience with various skill levels. And, truthfully, 80% of all executives we've seen performing in a flash mob looked tremendously uncomfortable.

Viral videos become viral because they have an almost-indefinable nugget of appeal. Something that surprises people and makes them want to watch and share the video. Part of the charm is in absurdity and spontaneity; a truly "viral" video is incredibly hard to manufacture. It is certainly extra-hard for your average meeting attendee, and most of the "viral videos" we've seen end up veering perilously off-message and into the inexplicably bizarre territory. Of course, there's the option to parody other viral videos, but that takes away from some of the creativity this activity is supposed to foster.

There are the same issues with song mashups, etc. The bottom line is that "trend" gets played out and loses its aim quickly when done for trend's sake. We're not arguing against fresh ideas and changing things up--we like that--but sometimes tried and true IS better than flash-in-the-pan. Or flash in the mob.
Live Spark
Comments 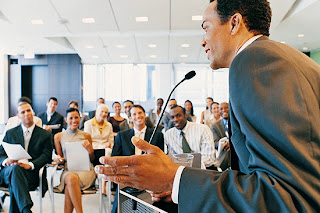 Speakers--professional or internal, or even professionally internal--can be a tremendous asset to an event. They can inspire and motivate, convey information, give important goals, announcements and milestones, etc. They *can* have a lasting impact on their audience.

However, there are a few fairly frequent mistakes that speakers make that tend to negate the good will of their audience. After hearing a few hundred (probably closer to a few thousand) speakers--both internal and external--these are our biggest presentation pet-peeves.

1. Apologizing for their time.
"I know it's been a long day, try to stay awake..." or "I know I'm coming between you and lunch..." Sometimes this comes off well--with a strong speaker--as a lighthearted attempt at humor. More often it comes off as a reminder that I really want to check-out and a red-flag that this speaker doesn't consider him/herself important enough to listen to on their own merits.

Instead: Own your time. What you have to say is important. If it's not, don't be on that stage. The audiences' time is a gift; don't apologize for taking it--make them glad that they gave you their time because you're giving them something valuable in return.


2. Saying "in conclusion" and not really meaning it.
I once heard a speaker--no exaggeration--declare his conclusion a half-dozen times in his presentation. He may have meant to conclude single points among many in a fairly long speech, but there was no way for the audience to know that. He said, "In conclusion..." and everyone prepared for a summary statement and the end. The fact that he then went on another 5 minutes, then concluded again, then went on another 10 minutes, and then concluded again, and so on and so forth, sorely tried the patience and attention spans of the audience. By the time his real conclusion came about a more fidgety bunch of folks I have never seen.

Instead: Only conclude when it's time to end your speech. You have 30-60 seconds to wrap up after you make a conclusion statement. It's a great signal in a presentation to have the audience sit forward and take in your final point, but they don't appreciate being jerked around by multiple conclusions.

3. Using incorrect/outdated/inaccurate information.
We were listening to a speaker who was giving a professional, paid presentation on a very serious topic. To make a point via metaphor, she told a story about a military dog--Brutus--who protected his captured owners by killing their captors with a single silent signal. Something about the story wasn't jiving, so those of us with smartphones (a great majority by now) went on a little fact-finding mission at Snopes.com. The story turned out to be untrue and debunked. Not only did we spend time in her presentation checking this out instead of listening to her message--but she lost some amount of credibility in her actual message.

Instead: Use metaphors that you know to be true, and fact-check any anecdotes, datapoints or tidbits of information. If your aunt forwarded you the email that you got the story from, it's best not to just run with it in your public presentation.

4. Thinking your message is more important than it is.
Being unable to see the relevance of their message in perspective to the audience's perception of its relevance is a huge stumbling block for a lot of presenters. Sure, you've spent 11 months in the trenches of marketing and the minutia of the new PR rollout is really fascinating for you and your team and you're really proud of it... but does your audience feel that way too?

It's like the episode of Seinfeld where Jerry and Elaine go to visit their friends who just had a baby. Their friends, of course, think their child is the most beautiful thing in the world...but...it's an ugly baby. Your content is the baby. You may think it's beautiful but it might not be completely relevant to your audience.

Instead: Think about the perspective of your audience before crafting a presentation. Does it fit into what they immediately NEED to know? Does it fill in a "what's in it for them"? If not at all--or you can't think of a way to make it relevant/fit--then you may not be the right choice for a presentation at that event.

5. Not rehearsing
You'd think that if someone were presenting in front of a group of thousands, they would at least rehearse their presentation, right? Wrong. And it shows. Sometimes this is as simple as not testing the technology--the video clips, the PowerPoint, the transitions, etc. Other times it's as simple as not practicing and being rough, unpolished and nervous. Still other times this manifests itself as speakers going way, way, way over time.


Instead: Even the best speakers in the world practice each presentation. Test your technology. Make sure your timing is right. However, do NOT rehearse by memorizing your speech. Be comfortable enough with your talking points to relax and simply talk TO your information instead of repeating back the information.

6. Having a very obvious "insert company here" message.
This is more for professional external speakers that make the rounds at big corporate events. A lot of speakers have a fairly canned message about how they accomplished X and Y and how it's relevant to you, as an employee of Z company, accomplishing A and B. Sometimes you can literally hear the pause for the "insert company here" line in their speech. Is it really relevant to that company? Does the speaker actually know anything about the situation? Not really. Yet they're trying to be motivational with a generic message.